5 Questions to Ask When Facing Rejection as a Leader 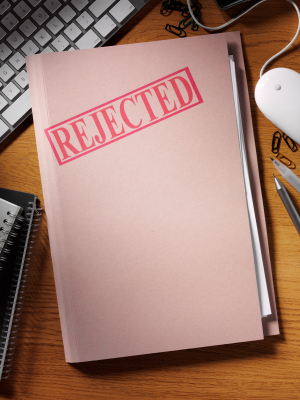 When I started an insurance business from scratch, I made hundreds of cold calls. Lots of people told me no. I’ll be honest, I hated this part of starting the business, but in time I got accustomed to rejection.

It still hurt sometimes, but I learned it was a natural part of successful selling. I couldn’t get to a yes (which paid the bills) without a lot of no’s.

Life is this way also. People aren’t always going to buy-in to what you’re selling or presenting. This is never more true than as a leader. No one is going to love every idea you present.

Leaders lead to somewhere they are hoping will be better than today. But this always involves change – and tension always accompanies change. Always.

And for the leader – part of their success may be their tenacity through rejection.

The fact is no one likes rejection.

Your proposal. Your product. Your presentation.

You love it. You believe in it. You want it to go forward. How could anyone reject what you’ve put your heart into?

It’s difficult not to make rejection personal, but it should be understood rejection isn’t always against you. Many times – maybe even most times – people reject because of their own level of comfort or acceptance of whatever they are rejecting.

When my ideas are being rejected I like to ask myself some questions.

Here are 5 questions to ask when facing rejection:

Is the rejection based on truth?

Many times rejection has no basis of truth. People may reject because of their own misunderstandings or their unwillingness to accept something new. If you are selling a product, they may not want what you have to sell. This doesn’t necessarily mean you have a poor product, it simply doesn’t match their needs.

And, then, there are rejections based on truth. The idea you are proposing is not good – or it has some flaws. You need to hear this rejection – discernment is a huge part of leadership. Be willing to listen and learn. If you will allow it, their rejection may actually make your idea better.

Is the rejection about you or your presentation?

If it is personal rejection then it’s a bigger issue, but if it’s rejection of something you only represent then it should be viewed differently – not taken personally. You’re simply a messenger. This goes for a product you sell or a Gospel you tell. If someone rejects the Gospel they aren’t rejecting you as much as they are God. Let Him deal with rejection.

If rejection is about you may need to ask yourself bigger questions, such as: Am I too pushy? Do I have a caring approach? Do others genuinely think I care for them? How can I communicate the importance of whatever I’m proposing, without devaluing them or their opinions?  (You may need to get coaching and insight from others if your ideas are constantly rejected because of your approach.)

Am I the wrong person to present the idea?

Sometimes rejection comes because you’re not an opinion which matters to them. This may sound harsh, but you weren’t called to minister to or lead everyone. A mentor once told me to find my affirmation among the people God sent me to minister to. Great advice. As a church planter, I would have many ideas (ideas dealing with methods, not theology) which were easily rejected by people in established churches. But, they weren’t to whom God had called me to minister. Why should I be bothered by their rejection?

I’ve learned I’m not always the one to propose something to an audience. I’ve had ideas, for example, which I believe could make our community better. I’ve learned those ideas are often more easily accepted when I can get some seasoned business or community leaders excited about them first. Their opinion often matters more than a pastor who has only been in town a few years. The same is true in the church. Some ideas come better from a volunteer than a paid staff member.

Is the rejection permanent?

Sometimes people say no – even many times – before they say yes. They have to warm up to the idea. They need to process it in a healthy way. I’ve found these people often become the best supporters, because they have wrestled through their objections first.

Persistence often makes the difference with great salespeople – and some of the best leaders. No one likes a pest or someone who can only see their ideas as valuable, but don’t be quick to dismiss an opportunity after initial rejection. It may prove to be the best idea ever if you wait. Timing is often everything.

Is the rejection based on a part or a whole?

This can be huge. Did the rejection have more to do with the overall idea or just some aspect of the idea? This is where you have to learn to ask good questions, know your audience, and be willing to compromise on minor issues and collaborate on major issues. This is where good leadership is necessary. You may have to educate people on what they don’t understand. You may have to allow input to make the idea stronger and more acceptable. If it doesn’t impact your overall goal or mission, be willing to listen, learn and make the final result even better.

Rejection doesn’t have to mean the end. Instead, it could only be an obstacle and be used to improve things in the end. The best destinations are met with many roadblocks. Standing firm through the rejections are a part of good leadership.