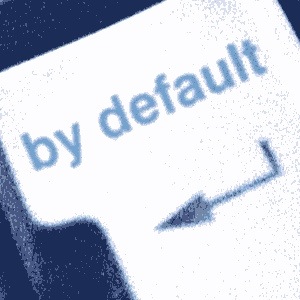 There are a lot of gray issues in leadership. So many times I simply don’t know what to do. I try to lead by consensus building, but even with the strongest teams there will always be decisions about which we just aren’t certain what is the best decision.

This is why I like to have some default zones in leadership. When I can’t make a decision – I know where to default.

Having a default action when things on both sides appear equal or you are uncertain about a decision may help you make better decisions. These aren’t foolproof, as many things in leadership are not, but having a general idea which way you would “default” in common situations, which occur frequently in leadership, may prove to be helpful.

Based on the team you lead, where you lead, and your past experiences as a leader, your defaults may be different from mine.

If you consistently have to make the same type decisions as a leader, think through which way over time has proven to be best. This becomes your default zone.

Here are 7 of my leadership default zones:

In matters of hiring – default to no over yes.

If in doubt over whether the person is a good fit, I default to no. It is not worth taking a chance when adding to the team. When I haven’t followed this one it has usually turned out to be a mistake.

If you think you shouldn’t say it – Choose not to say it.

I don’t follow my own advice here often enough, but I’ve learned if my gut is telling me to “keep a tight rein on my tongue”, it’s likely to be a Biblical conviction. The more I discipline myself in this area the more respect I garner as a leader – or the less respect I lose.

If it’s between empower or control – choose empower.

Except in cases such as vision or a moral issue, letting go of control and empowering others almost always works out better than expected. Even if the person isn’t successful, I have seen the learning curve for them and the team is huge and often some of the best discoveries for the team are made when I get out of the way. The area I control always limit us in this area.

There are times I have to make the hard decision to stand alone, but I try to surround myself with people smarter than me. If I am clearly outnumbered, I tend to lean on the wisdom of the team. You won’t keep respect as a leader if you continually stand opposite your team and keep being proved wrong. And if you believe in your team – prove it.

To do something in person or by email – Choose in person

By far, email is my most frequent communication tool. It has to be, just because of the sheer number of communications I have in a given week. But when I can, especially with our staff, I choose the personal touch. Get up from the desk and walk down the hall when it is an available option. Email and text are misunderstood far too many times. And we need personal connections to build strong teams.

If you have to assume or ask – ASK for clarification.

If you aren’t sure you understand what someone is thinking – if it doesn’t appear they understand you – rather than assume – ask. I’m continually asking my team something such as, “When you said _____, can you help me understand what you meant by that?” Misunderstanding leads to strained relationships and unhealthy teams. The best leaders I know ask the best questions. And they ask lots of them.

Leaders usually have more opportunities than time can allow. I’ve learned – the hard way – no one will protect my calendar as well as me. I’ve also learned when I over commit – I become less effective, I burnout easily, and, over time, eventually I’m useless. I disappoint less people when I don’t commit on the front end.

These may not be the ones you need – you may have your own, but learning your leadership default zones may make you a better leader.

Do you have any you would add?