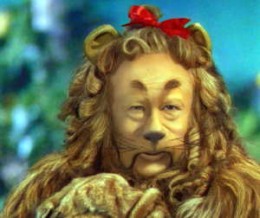 I’ve known some leaders like the cowardly lion. If I’m completely transparent — at times it’s been me.

Let’s face it. Leading others is hard. There is often loneliness to leadership. Leadership takes great courage.

Say what people want to hear. The might say, for example, “I’ll think about it” rather than “No” – even no is already the decided answer. I get it. It’s easier. But the ease is only temporary. These leaders are notorious for saying one thing to one person and another to someone else. They want everyone to like them.

Bails on the team when things become difficult. I’ll have to admit this has been me. I’ve written about it before, but when I was in business, and things were difficult, it was easier to disappear than face the issues. The learning experience was once I checked-out or when I was disappearing so was my team. Great leaders are on the frontline during the most difficult days, leading everyone through the storm.

Caves in to criticism. Make any decision and a leader will receive criticism. Even if it is unfounded cowardly leaders fall apart when people complain. They take it personal and refuse to see any value in it. These leaders see every criticism as a threat against their leadership rather then another way to learn and grow.

Let’s be leaders of courage. In fact, I want to believe courage should be in our definition of leadership.