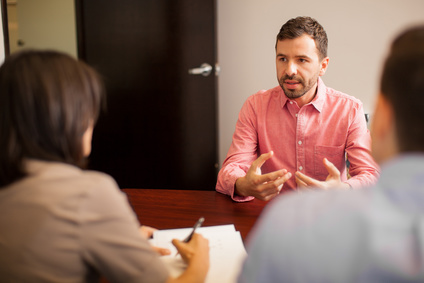 I remember an especially hard year as a leader. It was so bad several members of our staff had told me where I was letting them down. So much for having an “open door policy”. The next year I closed the door. 🙂

Not really, but this was a year where staff members said to me, “I have a problem with you.” They may not have used those exact words, but the point was clear – I can be an idiot at times. There were significant areas where I needed to improve. Thankfully, I haven’t had many of those years, but I’m glad now I had the ones I have, because they have taught me a lot about my leadership.

There is room for improvement with any leader and maturing leaders welcome instruction from the people they are trying to lead.

Most of the time when I’ve been corrected by someone I’m supposed to lead, I deserved it. Plus, anytime someone on a team is brave enough to rebuke their leader, you can be assured he or she is either:

In my opinion, good leaders try to create environments to live within the third option. I hope this was the case in my situation.

I should also say, especially on behalf of my fellow senior leaders, that criticism comes easily to leaders. We don’t have to ask for it. Do anything at all in leadership and someone will have a problem with it – and they won’t always be kind in how they voice their complaint. I like to say “you can’t see what I see until you sit where I sit”. Leading is hard and I am not suggesting we make it harder.

But I’m not talking about the negative type of criticism. I am referring to constructive feedback from people I care about and who respect me. We all need that at times.

Here are 7 ways to welcome correction from the people we lead:

My work environment is somewhat different now, because we have a very remote working environment. As pastor of a large staff, it was even more important to keep the door to my office open. But it was more than than simply the door. As a leader, I try to make my schedule available to the people I lead. And, if I’m in the office, my door is “open” and I want people to know they can walk in anytime. In addition, I try to help teams I lead know that I consider responsiveness to be of highest value to me. If they contact me, I will attempt to answer in a timely manner.

Include others in decision making.

If a decision affects more people than me, then I want more people helping to make the decision. This is true even if it’s a natural decision for me to make. The more I include people in the decision-making, the more likely they are to want to follow the decisions made. In fact, I seldom make decisions alone.

Consistently, throughout the year, I ask people to tell me what they think. I ask lots of questions. I solicit opinions on almost every major decision I make. It’s a risky move, because many will, but it’s invaluable insight. And, the more you ask, the more freedom people feel in sharing.

It’s important that I recognize when decisions made are my fault. People feel more comfortable approaching a leader who doesn’t feel they are always right.

In addition to admitting fault, I must own my share of projects and responsibility. The team needs to know that I’m on their side and in their corner. When they are criticized I own the criticism with them. I have their back. (By the way, this is only learned by experience.)

I should also say all these are still not enough. Constructive criticism from people who care about you and want your best, especially from people you lead, only develops over time as trust is developed. They have to trust you and you have to trust them.

Receiving correction – or constructive feedback – is difficult for anyone, perhaps seemingly unnatural for most leaders. I believe, however, when a leader is open to healthy correction from his or her team, the team will be more willing to follow the leader wherever he or she goes.