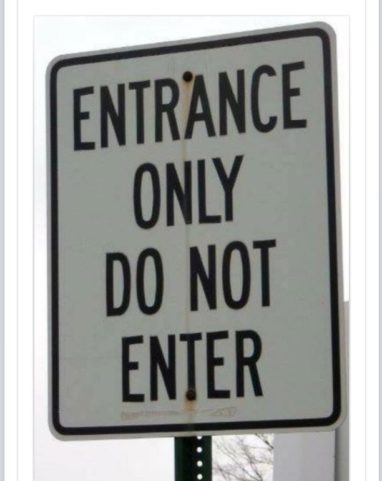 I’ll be honest. I’m not a huge fan of most policies. It may be because I’m not a very good rule follower, but I honestly don’t think many policies work as well as they are intended.

Policies are defined as a course, plan or principle of action. They are designed, by definition, to offer a sense of control. In theory, policies are to make things better and, I will admit, they are a necessary part of dealing with people in an organizational setting. Without policies we would have chaos.

I realize even the title of this post has some people already objecting. I will have some of my rule following friends who disagree with my wording or maybe even that I would seem against policies. And, maybe the title is too strong. I probably should say I hate bad policies, because that’s more the reality. I love good policies. Okay, love is too strong a word also, but I don’t hate them. But, it’s my firm conviction many organizations (especially churches) have too many policies. And, especially too many bad policies.

My problem with polices is they often interrupt progress rather than enhance it. If not careful, a policy may control the success you want to see as a leader. I personally would rather have chaos with no policies than a bunch of really bad policies.

When I got to an established church we had a policy – voted on by the church in a business meeting at some point – on folded chairs. True story. It told the procedures to do if someone borrowed folding chairs from the church. It should be noted we probably no longer even had the chairs of which the policy spoke, but just in case we ever did again there was already a policy in place.

Granted, policies may make sense when they are created, but as we look at the issue from a bigger picture they can even appear comical over time. Obviously, we can figure out what led to a folding chair policy. Someone borrowed chairs. They didn’t bring them back or treat them as they should. Therefore, to prevent this from ever occurring again people wrote a new policy. (Not to be over-dramatic, but it almost sounds like what the religious rulers were doing when Jesus began His ministry.)

Here are 4 reasons I hate policies:

Policies eliminate a sense of freedom

Policies, by nature, are methods of control. Even for those who love rules and want everything spelled out for them, policies can add a sense of burden as you attempt (or don’t attempt) to live up to their demands. Show me an environment with a bunch of policies and you can almost always find some stressed out people.

Policies limit ability to think outside the box

Policies can limit thoughts to a pre-determined outcome, which keeps the random and potentially explosive thoughts from developing. They can limit people’s ability to dream, explore, redesign and imagine. If everything is spelled out for people they have no reason to actually think for themselves.

The parameters of a policy often produce an atmosphere of mediocrity. Everything is clear. Planned. Written. Solved. No need for improvement here until someone finds another way to mess up, of course, then we need to add another policy.

Policies curtail the pursuit of progress

The weight of meeting the demands of policies can take valuable energy from pursuing things, which have the opportunity of producing greater progress.

In lieu of a policy for everything, here are 4 suggestions:

Ask yourself if the policy is needed for everyone or just a few people. Is it needed for everyone to keep us organized, effective or legal? When the answer is it’s only for a few people, rather than create a new policy to control an issue, deal directly with the individuals who need more control. For example, in the case of the chair policy I mentioned above, rather than write a policy – go get the chairs! (They are likely in the garage.)

If a team has more than one person, then there will be more than one type of person on the team. Do you follow me? Policies tend to treat everyone the same, which ignores individuality and personality differences. Some people may need to be in the office to get things done, for example. They may need help disciplining their time. Others may work best when the schedule and work environment is more flexible. Put me in a coffee shop and my productivity grows.

Lead as much (or more) than manage

Management is more about implementing policies and seeing they are adhered to completely. And, we need good management. I’m a huge advocate for good management. Leadership, however, sets a vision and guides people towards it. Less policies are needed in that process.

Policies are easier to measure. They often have a pass/fail assessment attached to them. The less policies you have the more you have to allow for grace and forgiveness. But, people learn from their failures best when they know they can explore and create without the repercussions and fear of breaking a policy.

My bottom line on policies:

I’m not suggesting we can do without policies, or that we should try, but I am suggesting they should not be the “go to” solution to a problem. Most problems in an organization don’t need a new policy. Policies can weigh down progress. Granted, leading is more difficult without policies – even a little messy, but with less policies you’ll almost always have opportunities for greater success.

Here’s a challenge: Look through your policies and rules to see which were created to control people as a reaction to a problem, which should have been handled individually, and which is a policy no longer needed.

The real challenge is to lead towards an environment which empowers more than it controls.