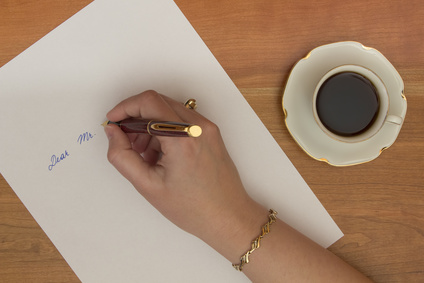 Writing a letter is sometimes the best way to communicate effectively.

When I was doing professional counseling with people who were experiencing difficulty in a relationship, I often encouraged them to practice the art of letter writing. Most of the time I tried to help them improve their one-to-one communication skills, but some things are easier and better to express on paper than in person.

For example, a letter may be needed when a couple cannot communicate without arguing, or when one person refuses to listen to reason, or if you can’t even get an audience with the other person. It could be best when one person is so intimidating to talk to you can’t get a word in verbally. Or, it could be you are too emotional every time you try to address the issue you can’t get your point across adequately. And, some people express their best thoughts only when they have time to think about them.

It’s not as impersonal as it may seem. It may actual be more personal. Some things seem to convey more importance and get closer attention if they are written rather than simply spoken.

A letter allows you to think through what you have to say and cuts down on reactionary arguments, which naturally come when trying to discuss something controversial. A letter will usually be read several and even many times; further enforcing the points you are trying to make. A letter is harder to dismiss than a verbal conversation.

Please note, I am NOT suggesting an email. This is letter writing. It requires a paper and pen, or at least a printer and paper. Email quickly becomes an exchange of ideas, which can almost be as counter-productive as the verbal communication. It’s too easy to hit the “reply” or “forward” button quickly with emails. Who wants something this personal being placed on the Internet?

This is often a near “final straw” kind of approach, so put the time into it that it requires.

I’m also not advocating that you avoid personal conversations, but if the situation calls for it, write a letter.

Here are 10 things to remember before writing your letter:

Remember, this is not a miracle cure, so don’t expect immediate results. The person may not respond the way you would have them to and you may not even know they have read the letter. You can almost be assured they will!