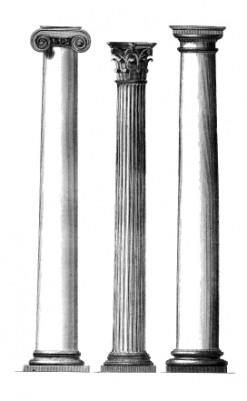 I love observing leaders. I consistently strive to be a better leader and the best way I know to improve is to watch and learn from other leaders. Whether they have more experience, have learned things I haven’t learned or they reinforce principles of leadership I know – I improve observing other leaders.

In my observations, there are some common traits among the most successful, long-term leaders. It can be easy to lead for a season, or a special project, or even for a decade or more. But, leaders who last and are successful for multiple seasons, multiple decades – often in different environments or organizations, with different people – these leaders are rare. And, they have shared characteristics.

I call these traits the pillars of leadership.

Pillar:
1. a firm upright support for a superstructure
2. a supporting, integral, or upstanding member or part

In my opinion, I believe you’ll find these pillars among all truly great leaders.

Great leaders believe in something bigger than today. They are going somewhere. And, they believe it’s a worthy enough vision they are willing to help others get there. They have a vocabulary around their vision. They know how to engage and rally people around the vision.

Great leaders remain rock-solid in their dedication to their cause and their people. They stick to what they feel in their heart God has called them to do. They are unwavered by public opinion or the “mood of the day”.  They aren’t only present in the good seasons, but weather the storms of time. Their faith keeps them grounded.

Great leaders make decisions – even the difficult ones – even the unpopular ones. People are willing to follow them, because they know they won’t sit on the sidelines while the world passes. They aren’t exclusive in making decisions – great leaders encourage collaboration – but they won’t compromise principles either. They are firm in their convictions and willing to stand for them when others won’t.

Long-term, successful leaders don’t jump ship when times get difficult. In fact, some would say you don’t realize you need a leader until times are hard. These leaders confront reality head-on; leading through needed change to a better reality. They don’t cower to pressure to conform or fail to say what needs saying. Equally, they aren’t hogs of attention. They don’t need to receive all the credit in order to lead the people to victory.

Great leaders realize others matter. They know there is no leadership without people to follow. They believe in the value of those on their team and are willing to invest in them. They aren’t users of people, they are people-builders. They love people and love to see them succeed. They recognize and reward other people’s contributions.

It’s what gets a leader up in the morning ready to face another day. They believe in their call to lead. They are zealous to see it come to reality. They have a contagious enthusiasm. They are positive-minded and believe and hope in the days ahead.

Great leaders are strong in what matters most – their character. They have integrity, high morals, and qualities others can and want to follow. And, they are consistent over time in protecting their character to be above reproach.

Obviously, in my specific role as a pastor, these are pillars worthy of my quest to achieve. I certainly see them in my Savior – the best leader I know – Jesus. I’m striving to get there. I want to possess the pillars of leadership. Who’s with me?