Hiding in Arrogance…A sobering word to captains of sinking ships 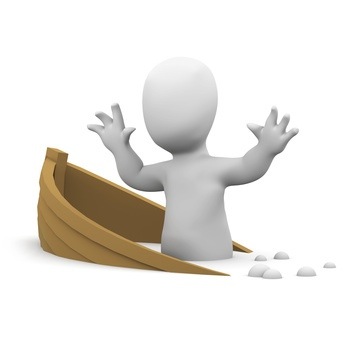 I’ve seen it many times.

The leader at the helm of a sinking ship.

It’s almost historically comical it it wasn’t such a serious issue.

Everyone around the leader may know there is a problem, seemingly except the leader. And, yet, many times the leader knows…they know all too well…but arrogance…or dare I say stupidity…keeps the leader from admitting…and certainly not owning a problem.

And the water keeps getting higher inside the boat.

In fact, in my observation, one huge reason the ship goes under is because the captain wouldn’t admit to the sinking ship or didn’t know how to stop it, but never asked for help guiding the process. It takes humility to confess the boat is soon subject to evacuation. No leader wants to be that captain.

By the way, I know all this this not by second hand observation. I’m not trying to be cruel with this post. If you’re that captain it hurts. It doesn’t feel good. It’s scary.

But, I know it by experience. I know it by being the captain of a sinking ship. And, some of the best life and leadership lessons I learned were from that experience. (Read one thing I learned HERE.) And frankly, looking back, we evacuated too soon. I still believe we could have saved the ship. I wish I had known then some things I know now.

But, if I had one thing to share from that time it would be this. Don’t pretend the problem isn’t real. Don’t act as if the ship isn’t sinking. Don’t ignore the warning signs. Listen to others. Signal for help now. Raise the flag of distress.

I wouldn’t go public on social media that you’re ship is sinking. That’s not a good idea either. But, there are probably people who already know. They can help. Drop your pride and ask for it.

Here’s a prayer on your behalf:

Dear God, give us humility as leaders. And, as we make outselves awkwardly vulnerable, save the ship…and receive the honor! In Jesus Name. Amen.