The Immediate Need to Create a Lasting Legacy 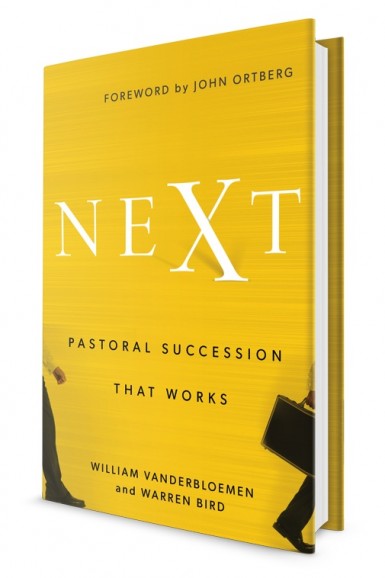 Succession has been a hot topic in a whole lot of church circles lately.

I visited with my friend William Vanderbloemen who just wrote a book on the subject called Next: Pastoral Succession That Works, which is a church leader’s comprehensive guidebook to understanding what you can do now to prepare for the day your church faces a leadership transition.

The church needs this book. Here’s the interview.

Ron: What is the “big idea” behind this book?

William: It really comes down to one sentence: Every pastor is an interim pastor.

Why? Because unless you plan on pastoring your church after Jesus returns, every church will have to face the reality of a leadership transition. Are you ready? Most people aren’t. Many church leaders equate succession planning to retirement planning. However, smart church leaders realize that succession planning is much more than that. We hope that this book will be a conversation starter and a guide for pastors and church boards as they look to the inevitable reality of transition.

Ron: In Next, you mention the old adage, “Everyone wants to talk about succession…until it’s their own.” Why do you think that is?

William: What we found in our research for Next is that no career ties identity to job more than the pastorate. What other job coincides with more key parts of life? Who else performs their daughter’s wedding at work? Who else buries longtime friends as part of their job? What other career ties personal spiritual formation to career performance? It is a difficult job to leave because our identity as a pastor is tied to our church, but this is why focusing on leaving a legacy through a healthy succession plan from day one in the pastorate matters so much.

Ron: You give countless real-life stories of pastoral transitions in Next. Since every succession is different, what defines a successful succession?

William: I encourage church leaders to first ask themselves, “What would success look like three years after the hand-off from the outgoing pastor to the successor pastor?” Even if you’re part of an appointment system where you have no say in the person who will follow you, you still have a huge influence in how you end, how well the church is prepared for a successor, and what path and direction the church’s momentum will be moving toward when the successor arrives. For pastors who have no idea where to start with succession planning, chapter 2 of the book includes “The Ten Commandments of Succession Planning” which walks pastors through ten steps that they can do today to prepare for succession.

Ron: As the Baby Boomers near retirement, perhaps more pastors will be thinking about succession planning now than ever. What advice would you give outgoing pastors?

William: Great question! But before answering it, I’d love to point out one golden rule of succession planning: It’s never too early to start. I would be thrilled if pastors in their 30’s bought this book and began planning now. When I was a young pastor, John Maxwell told me, “William, spend your younger years creating options for your later years.” I believe that more than ever now.

But onto your question….Too often pastors stay at a church not because they’re thriving but because they don’t have anything else to put their passion into. Having a plan for how you will spend your energy after you leave your church is crucial to a healthy succession. Chapter 4 of Next helps pastors frame when it’s time to move on from your present place of service, but the more fundamental issue is figuring out what you should do next in God’s big picture for your life.

Ron: You and your co-author Warren Bird from Leadership Network did hundreds of interviews for the research on the book. What was the most surprising trend you found?

William: There are a whole lot of surprises that we found, but two trends come to mind: I was shocked to see the average ages of the pastors of the largest churches in the country. There are some great infographics and tables in the book with that sort of information. Seeing it laid out in one spot convinced me that succession planning is a looming crisis for the church.

Secondly, I never realized how much of a good succession rises and falls on the outgoing pastor’s spouse. There are a number of great stories in the book that highlight this. Smart churches will pay attention to that dynamic and find ways to address it as they face transitions.

This is a topic that I think about myself as a pastor and leader. I encourage every pastor to order Next and start thinking and talking about succession on a regular basis.

Order Next: Pastoral Succession That Works now at NextPastor.com and save $5.