A Theory: Speed of Growth Determines Speed of Decline 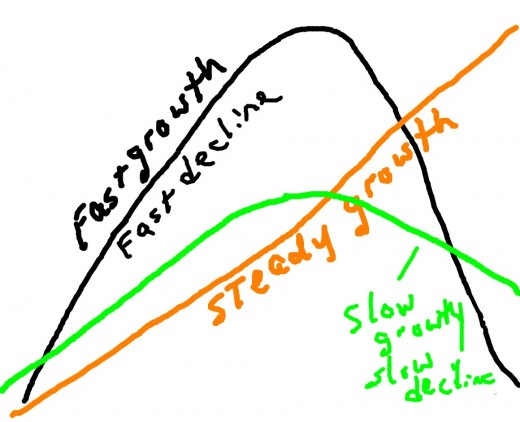 Theory: The rate of increase, often determines the rate of decline.

In my early twenties, I was working in retail and this theory developed in my mind as I watched dozens of items gather immediate interest, grow rapidly in popularity, quickly rack up sales, but then as a fad changed, the item sales just as quickly decline.  I called it my “fad theory”.  Other items grew slower, but styles changed gradually and so they slowly began to decline in sales.

Let me give you two classic examples I observed firsthand:

Item One: Michael Jackson “Thriller” jackets – Do you remember the red, multi-zippered jackets made popular from the music videos? When that video came out, the song and the jacket became an overnight success. We couldn’t get the jacket fast enough. Every order we received sold out within hours.  They couldn’t make enough of them. Then one day…right after we received a huge shipment of jackets…another overnight success happened in the music industry. I don’t remember the song, but I do remember no one wanted a Michael Jackson “Thriller” jacket.  We had racks of them remaining, but sold some for $1.88 in a Moonlight Madness sale and gave many of them away to charity.  We lost all our profits from the rapid sales in the rapid decline.

Item Two: Penny Loafers – Do you remember the leather loafer that had a slot for a “penny” in the front?  Although loafers had been around for years, and continue to be worn today, in the 1980’s Michael Jackson gave them attention again, as he was continually seen wearing them.  The growth, however, was gradual.  It took a couple seasons for their popularity to spread through the culture, but soon our retail shelves were full of them.  They remained popular for several years, but gradually, as new styles were introduced, their sales began to slowly fade.

I have continued to observe this theory outside of the retail environment, so many times that I’d almost call it a principle.  I’ve seen it in business, in churches, and even in relationships.  The speed of the growth will greatly play a part in the speed of decline.

Please understand, I’m not saying there’s anything wrong with fast growth…I kind of like it…but we should know that the rate of decline, should decline occur, may be swift.  Additionally, this is not a theory that reinforces the saying “what goes up must come down”.  I’m not completely sure I agree with that one.  This is a theory about velocity…that if something does begin to decline, it will decline at a similar speed in which it grew.

As a closing application example, in my current church, I have continually reminded our staff that because we have experienced rapid growth, what we have is more tender…our people don’t have as deep of roots and we don’t have the solid financial base of an established church, etc. I’m not hoping for, predicting, or expecting a decline anytime soon, but what it does remind me is that if we ever had something dramatic occur in the life of our church, such as a moral failure of a key pastor, that our rate of decline could be as fast as our rate of growth has been.

There’s my theory…apply as needed.

Does this theory make sense to you? Have you seen an example you could share with us here?